On Wednesday 27 April 2022, the ISA were finally able to present the 2020 and 2021 winners of the Lexden and Whitbread Prizes with their accolades, in a reception kindly hosted by the Association’s President, Lord Lexden, at the House of Lords.

The Whitbread Prize recognises academic excellence in Year 11 exams, as well as outstanding contributions and service to school and the wider community.

Our award for Sixth Formers, the Lexden Prize, is named in honour of the Association’s President and also celebrates achievement in the broadest sense, not just academic.

Sadly the pandemic meant that the presentations were impossible to arrange in either 2020 or 2021, but Wednesday 27 April provided the opportunity for four young people to celebrate their achievements and reconnect with teachers who supported them on their journeys at school.

In 2020, Buraq Ahmed from Cardiff Sixth Form College was named the winner of the Lexden Prize.

Buraq left his parents in Iraq at the age of three to travel to the UK with his grandmother to be treated for congenital hip dysplasia.

Earning a full scholarship at Cardiff Sixth Form College, the keen footballer did not allow his condition to limit his opportunities as he took on the challenge of debating, became a member of the student-led Medical Ethics Society and held the role of Vice President of the NASA Space Settlement Design Team – being selected to represent the UK by Imperial College in the process. 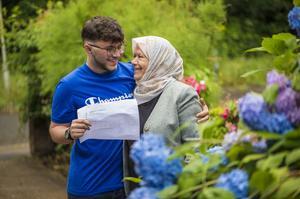 Buraq, who now studies medicine at Cambridge University, also dedicated his time to the local community as a Youth Scouts Leader and assisted the Welsh government in their plans for charitable support during lockdown, setting up a free UCAS guidance service to assist other students by tutoring them in preparation for the UCAT and BMAT pre-university tests.

Also in 2020, Maxime Hashem from Wetherby Senior School was honoured with the ISA’s Whitbread Prize.

Maxime arrived at Wetherby Senior as part of the school’s first cohort of Year 7 pupils and achieved excellent results in his GCSEs.

Maxime, who is now in Year 13 at Wetherby Senior and exemplifies the school’s values as Head Boy, carries a keen interest in the sciences and maths, always curious to understand how the world around us works. Something that was challenged during his time as President of the Robotics Club, who earned themselves second place in the inaugural Lego League national challenge.

He’s been a leader during his time at the school, captaining the Under-16s rugby team, who were runners-up in the 2019 Middlesex Cup.

A passion for the Arts was also clear, as Maxime is a winner of the Marcus Burnette wildlife photography competition, played the tuba in the brass brand and been involved in every school play.

Maxime has been key to Wetherby Senior’s charity work, raising awareness for Steel Warrior, who remove knives from the streets and co-founding the Barbell Society to fundraise and encourage healthy and active lifestyles for boys in the lower year groups.

Cyrus, who grew up in South Africa, has always held a passion for economics and used the breadth of opportunities available at Queen Ethelburga’s to explore solutions for less-developed areas of the world.

He’s already a written a book on Microeconomics, ‘What the heck is Microeconomics?’, the profits of which are used to fund a foundation he created.

Cyrus founded the Zarrebini Foundation in 2019, a source of educational support for both children and adults in Brazil and South Africa. The foundation teaches over 200 people English. 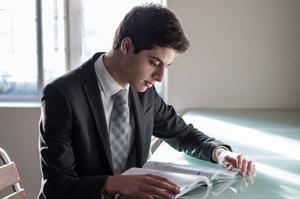 Cyrus grasps creative opportunities with both hands, taking part in national essay competitions from the Financial Times and The Economist, and playing the lead role of Billy Flynn in the school’s production of Chicago.

Innovation is at the heart of much of what Cyrus has worked towards, which is why it isn’t a surprise that he finished in the top 20 of the Prospect 100 Global Innovation Competition judged by Steve Wozniak, co-founder of Apple.

The ISA’s four awards for pupils over the last two years were crowned off by Isabelle Engestrom from Abbot’s Hill last November.

Isabelle achieved straight 9’s in her GCSEs last summer, which earned her a scholarship for applying to sixth forms and also saw her named as winner of the ISA’s Whitbread Prize for 2021.

Our awards for pupils also celebrate contributions to the whole-school community; Isabelle demonstrated this as a part of the Abbot’s Hill Head Girl team, her role as a Prefect and as Chair of the School Council. 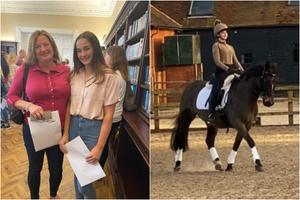 She also acted as a subject ambassador for the school and was a member of the Chamber Choir.

Isabelle’s excellence wasn’t confined to the school day, as she landed remarkable equestrian honours and showcased her leadership skills as captain for the National Schools Equestrian Association Championships in Dressage and Combined Training.

Isabelle was selected for an international Dressage competition, finishing third individually as the UK team won the event.

The ISA staff team are inspired by the achievements of these four students, and all nominees for our Whitbread and Lexden Prizes, who will always take pride of place on our Rolls of Honour.

Thank you to Lord Lexden for hosting a wonderful afternoon reception for these four outstanding young people, who were joined by the family members and school teachers who’ve helped shape their journeys.