Many ISA schools are at the very heart of their local communities – and work closely with state schools, charities and other bodies in their areas. Contributing to the local community is central to the charitable ethos of ISA schools. Whether proprietorial or charitable trusts in their own right, many are engaged in exciting partnerships and projects within their local areas or even further afield.

Partnerships between ISA schools and those in the state sector involve the sharing of best practice, expertise and facilities to the benefit of children in all of the schools involved. Such partnerships are always two-way, with children and teachers from all backgrounds enjoying the benefits of collaborative work.

The impact made by ISA schools in their local communities was again showcased in the Celebrating Partnerships report from the ISC. The endeavours of five of our schools were published. The full 2021 issue can be read here. 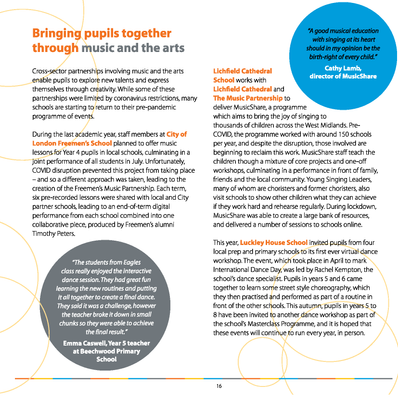 Pupils from 4 local schools were invited to Luckley House School for a virtual dance workshop in April that offered children the opportunity to express themselves. The International Dance Day event has been followed up by another workshop this academic year for years 5 to 8. 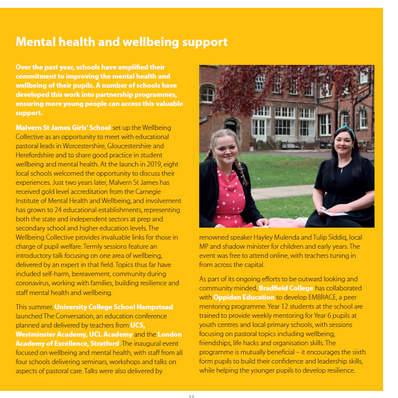 The Wellbeing Collective was set up by Malvern St James’ Girls School back in 2019 and now involves around 25 educational institutions. The initiative to share good practice in pastoral care has been recognised by the Carnegie Institute of Mental Health and Wellbeing with a gold award. 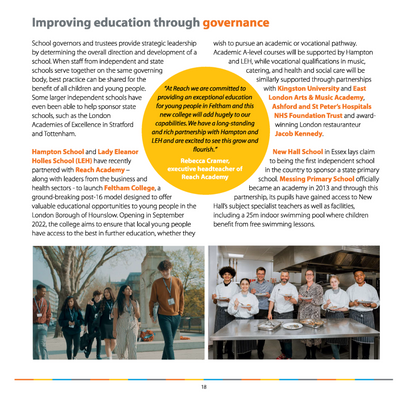 We’re proud to be associated with the first independent school in the country to sponsor a state primary school in New Hall School. Messing Primary pupils now have access to New Hall’s subject-specialist teachers, facilities like an indoor swimming pool - providing Messing Primary students with free lessons, and the partnership has also facilitated improved ICT resources, both from a teaching and learning perspective. 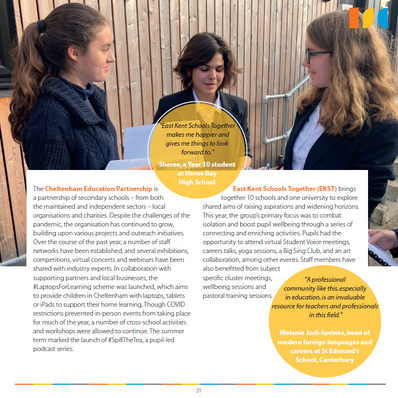 St Edward's are a part of the Cheltenham Education Partnership, involving secondary schools, as well as local organisations and charities. The #LaptopsForLearning scheme provided children in Cheltenham with the technology required to support home learning. A pupil-led podcast series has also developed as part of the initiative. 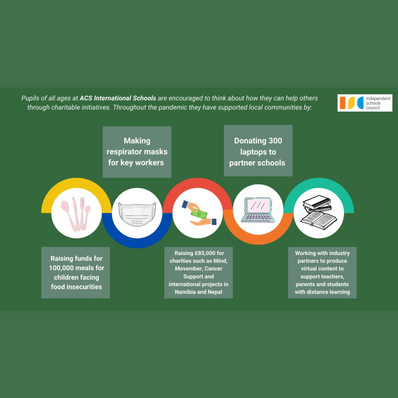 The ACS International Schools, based in Hillingdon, Egham and Cobham, all contributed to initiatives that helped key workers, partner schools, charities and international relief plans as far as Nepal over the course of the pandemic. Funds were raised to source 100,000 meals for children facing food insecurities, over £85,000 for charities such as MIND, and 300 laptops were also provided to partner schools, alongside the virtual content necessary to facilitate remote learning.

The collaborative work of many of our schools (both charitable trust and proprietary) can be found on the SchoolsTogether website. Partnerships between state and independent schools can be seen on Twitter via #powerofpartnerships.

Schools across the ISA are also actively engaged in a whole range of charitable fundraising and practical work, both in the UK and abroad. Read more about those campaigns here.